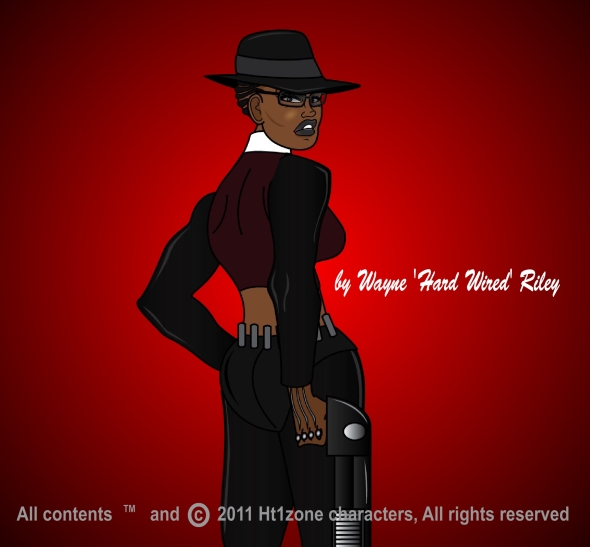 Now I am sure that most people reading this will agree with me to this point but I am not going to take the predictable ‘white media is holding us down’ stance that is often all too easy to spew when this topic comes up.  I believe the reason we do not see enough black characters in animation is a lot more down to black artists and creators themselves rather than the fact that mainstream media outlets wont host their material for whatever reason or any other conspiracy theory out there.

Make no mistake about this there are thousands of artists creating black characters all day every day and if its not thousands its a lot more than that but I am going on guess work based on who I have around me and who I am exposed to online, if you saw my friends list on facebook as well as some of the groups I am in and on other sites like the black science fiction society they are literally full to the brim with artists who are drawing their arse off and have a healthy amount of black characters that they draw all the time.  It was a bit overwhelming for me at first because when I saw this for myself as I was wishing I discovered these people earlier in life.  So when I was blessed with this breath of fresh air and discovered that such a thing does exist where black characters are not taboo as I thought the next question I was forced to ask myself was “why is this so…………. underground?” I think this is a fair question considering how good this work is that I see.

When I share some of the images I have seen by other artists as well as my own images and animations I have made to people who are new to this I kid you not its like I changed their life with a picture in a matter of seconds its like watching a chemical reaction.  I have done loads of drawings more so of black females lately and I ain’t met one black person yet who has not been intrigued, truth be told I have met people who are not black who are equally intrigued as its different but again, if this is the reaction I get (which is a good one) why is this still so underground?

After working on my own cartoon hard wired for about a year by means of character design, story boarding, composition, sound recording copyrighting and patenting I finally worked it out in fact that list alone should tell you why we have this problem.

Its because animation is a LONG LONG LONG process especially if you have set yourself a standard on the same level as what you are a fan of.  I wont go into the details and bore you with it but I have included a video which may show you the process of it for those of you who are not aware.

The making of a scene

Now consider how many people it would take to make a cartoon, you need the artists to draw the characters, you need an artist to draw the background images, vehicles, props, and so on and then you need to actually find someone to sequence the movement which is arguably the longest part but also the most fun in my opinion. You have to do sound recording of voices and other sounds, music and lets not forget story boarding and of course you need the time to organize this all to happen in the first place.

This is just a snippet of what is needed when you are making a cartoon, you can do it all yourself if you wish to but if thats the road you wanna go down if you are intending on making a high end production that will match what we see on television and so on you can forget about having a girlfriend/wife or a social life, and that play that your daughter is singing at next month? ya gonna either be late or you are gonna be half asleep because being an animator destroys your sleep patern.

Why would a storyboard artist for example dedicate their time doing thumbnail sketches for a project for some guy with an idea?  This same guy likely has to pay back student loans and all their other bills just like everyone else meaning they may not very well likely being paying you for your work for a long while until they get that
investment budget they are so hoping to get (which they may not get at all). What make makes their idea better than his, hers yours or even mine, enough to justify you
putting your all into their project while you put your own dreams on the back burner? Thats the point, we all wanna do our own thing and then even if we we happen to be fortunate enough to get a collective of people who want to be involved what if all of the artists who were good enough to get on board don’t agree with the concept of the characters being mostly black? Dont look at me like that this has really happened and to me, true stories I’m not making this up its a guilt trip that I have accepted comes with the territory.

People today like to just move individually and do their own thing people who were part of a collective often break apart at some stage just like most rap, grime and rnb groups everyone goes solo for whatever reason or maybe things get difficult and people soon come to the conclusion that they can’t tolerate each other because they know the option of going solo is there.

This all leads to a trend that I have noticed and its a trend where all the artists make EXCELLENT still images that may sell a little on deviant art and get a few people on facebook clicking like but thats it.  Now this is not to mock any work I have seen, quite to the contrary I am talking about artwork that will blow away next to everything you see on cartoon network, the talent on the underground is there but I just feel that when so many of us want to draw and get a job working for some big company (if ya lucky) who will likely convince us to change our style to accommodate what they do many artists fall into an empty void where their work gets better and better but nothing comes of it, I am not even trying to sound emotional but that breaks my heart knowing that there are good artists out there who are better at what they do then the people you and I know but they are not even heard of.

Artists like to draw images that do not get used and to me this is like being a really good hip hop producer but not making any rapper put a hot sixteen on it. This is the issue for anyone making a new cartoon from scratch but what I have laid out gives you the extra layers of politics that one will face if they want to make a cartoon with an all black cast.

I am among one of the people working on an independent cartoon and its taking a while but I feel it is worth it, fortunately I have a team of people who are working alongside me who fortunately do share the same vision I do and I did this by finding other character designers and telling them to include their characters into the plot lines, this gives
them an extra incentive to want to work together as supposed to going solo or thinking I am downplaying their craft.  At present most of the characters are made by myself but some of the characters have been conceptualized by other members of the team and I dare say there will be more characters in the future that I wont be the creator for.

In closing to my thoughts today on this issue I would advise any artist out there to find as many other artists as possible and find out who you can gel with and mix
your characters with theirs and do a partnership, this is something most if not all of us should do especially when its no secret that finding a job is almost like something
that may never come hence the people occupying Wall street.  This i idea also comes from my belief that more black people need to be in business and if enough of us do this today at least our sons and daughters will be able to have a job tomorrow based on what we build for them while we still can.

I have provided some links to other artists sites who are putting in work that I also happen to be fan of as networking is likely another reason that so many of us do not even know this kind of thing exists (I am one of those artists that like giving props to other artists.

That’s my rant over.

Error: Twitter did not respond. Please wait a few minutes and refresh this page.